Training Your New Puppy To Toilet Outside

Training your new puppy to toilet outside is often one of the first things new dog owners want to teach. It’s a super exciting time to have a new puppy in your life and this article is all about setting off on the right paw. Ideally, toilet training your puppy is done outside. But sometimes that’s not practical, for example if you live in a flat. So we will cover options for indoor and outdoor here.

One Thing To Remember When Training Your New Puppy to Toilet

Puppies have a very tiny bladder, they’re very tiny dogs. Naturally then their bladder and their amount of urine that they can hold is small. A good rule of thumb is puppies can hold their bladder for an absolute maximum of one hour for every month old they are. So at 2 months old the physical limit is 2 hours, although they would feel full to bursting and uncomfortable much before that!

Training Your New Puppy To Toilet In One Place

Rewarding Your Puppy For Toileting Where You Want Them To Go

It’s really important that while we’re doing puppy toilet training that we reward what we do want to see and we ignore everything else.

Now it can be really difficult if a puppy has just gone for a wee on your lap or on your best rug to not react. But that’s exactly what we should do. We should ignore any accidents in the house at all and clean them up out of sight of your puppy.

What you’re going to do is watch for the pee or poop to be completed and then say ‘good boy or girl’ in a really happy voice and reward them with a treat. This can be part of their daily food allowance and doesn’t have to be extra special (although feel free to jackpot them with something amazing every once in a while!)

Timing is really important in training your new puppy to toilet outside, wait for them to finish and sort of catch the tail end of the pee or the poop. Otherwise what we’re going to do is reward just starting to take a pee and they’re going to get so excited over their treat that they forget to finish off. Then we get a little bit of extra toileting activity when they come back inside.

Start with a toileting schedule. If you are bringing a puppy home in the summer months and you can spend lots of time out in the garden, if it’s winter, you’ll do the same just colder and wetter!.

You’ll want to be taking your new puppy outside every 20 / 30 minutes. Which sounds really extreme and honestly, the first few weeks of bringing a puppy home can be quite exhausting!

There are times when it’s more likely that your puppy will need to go to the toilet so add these into the schedule too. Just like us, as soon as you’ve woken up the first thing you want to do is go to the toilet and it’s the same for our puppies. Anytime they wake up from a nap or first thing in the morning, straight out into the garden for their poops and pees and after they have eaten. Eating often triggers a need to go to the toilet as well. Be in the garden as much as you can so that you set up your puppy to win.

The more wins you can get in the better and the quicker toilet training your new puppy will happen.

At all other times watch your puppy like a hawk. Anytime that they start doing circles and sniffing the floor, that’s a good indication that they probably want to go to the toilet.

Sniffs and circles are the start of your puppy communicating that they want to find a suitable place to toilet. Get them outside as fast as you can, and wait for that pee or poo reward it.

Training your New Puppy To Toilet On Different Surfaces

If you’re toileting inside what I would recommend is that you choose a substrate very carefully. Puppies learn to pee or poop on a particular substrate, what it feels like underneath their feet. It’s common for a dog to always seek grass if that’s what they learned to go on or always go on the path if they were taught to go on a patio. Puppy pads are really common but the downside to the puppy pad is that it can feel quite like a carpet. So whilst these can work really well in rooms with lino or laminate your puppy may still be tempted by the rug or upstairs carpets because they feel so similar to the puppy pad.

If you do have to train puppies to use the toilet inside there are now products available on the market that look a little bit like cat litter trays with fake grass on them. And they are fantastic because they should feel a little bit more grass-like which means you’ll have less difficulty translating the skill of go and pee on that piece of area there to being able to pay outside on the grass. The other thing is the chances are you won’t have anything else in your house that feels like that substrate.

If life gets better for your dog after they’ve given you a particular behaviour, they’re more likely to repeat that behaviour.

The second way that dogs learn is that if nothing much changes, they lose interest and don’t bother with that behaviour again. If they’ve put loads of effort into something and they get no reward, it’s just not worth the energy. If they’ve toileted in the middle of the carpet the best way to deal with that is to call the puppy outside. And if they pee or poop outside, brilliant reward that and totally ignore that they’ve peed or pooped on the carpet inside.

Put your puppy out of sight for a minute while you clean up so the puppy doesn’t think you’re admiring their work and you want a non ammonia based cleaner. Ammonia actually smells a little bit like urine to dogs. So if you clean with something that’s got bleach or ammonia in they’re going to actually still think that area is where they can toilet.

We’re going to clean the accident up and totally ignore it from the puppy’s point of view. Life didn’t get better for them if they peed on the carpet. But if you’ve done enough times with catching them in the act outside and rewarding that they’ll soon start to realise that if they go for a pee or poo outside they get a treat. If they go for a pee or poop inside, nothing much changes so they might as well just wait until you’re out in the garden and then you get a treat for doing pees and poops.

How NOT To Train Your New Puppy To Toilet

Back in the day it was thought that if a puppy had an accident and you rubbed their nose in it, then they would learn that it was a bad thing to toilet in that place. Now actually what happens in that situation is firstly, it’s really unpleasant for the dog. And secondly, it damages your bond with them. But crucially it doesn’t actually teach them what you do want them to do. This is frustrating for both you and puppy and a method best left in bygone years.

The techniques of rewarding pees and poops where you want a puppy to go and ignore everything relies on repetition and reward. It will take time for your puppy to learn, they have many things to get used to in their new life with you. Remember that they also do have a physical reason for needing to go to the toilet every few minutes and often won’t be able to go through the night until they are much older.

For the new puppy owner who wants a happy, well trained and healthy puppy PLUS lots of fun!
Find Out More
NEW!
PrevPreviousReactivity and Training A Reactive Dog
NextDog ParasitesNext 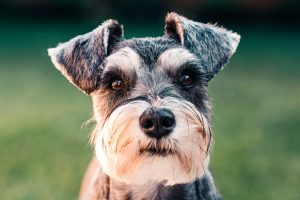 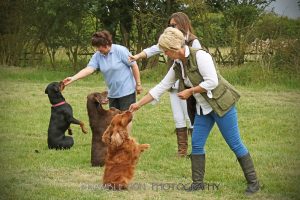 A Healthy Dog Is A Happy Dog 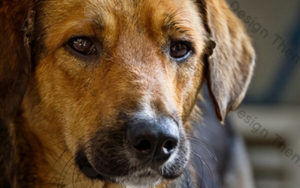