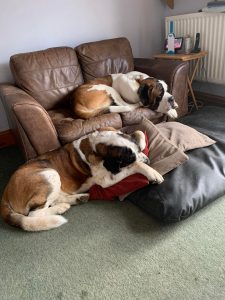 Bear was bought as Jo’s dream dog and very soon it became clear that there was something very special about Bear (and I don’t just mean his elbow dysplasia.) He’s one of those dogs who just knows what people are feeling, and what they need.  A true empath of the dog world. His calling in life is as a Pets as Therapy (PAT) dog and he takes Jo along to many of his appointments too. 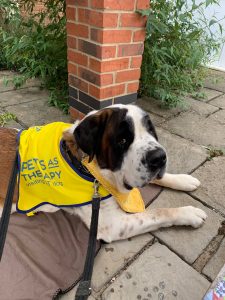 Despite being assessed and passed as a PAT dog at 8 months old, lockdown and his subsequent elbow surgery meant that he has only recently filled his diary with school visits and celebration events.  But even in those few short months his impact is being felt.

One of Bear’s jobs is to help children build their confidence with reading in school.  Dogs don’t mind if you get a word wrong while you’re telling a story, or if you mispronounce a name. So children who need encouragement and confidence really benefit from reading to Bear. The head teacher at a local primary school says Bear is the best reading incentive he’s ever seen, despite spending a fortune on other methods in the past. Plus Bear doesn’t charge for his work, he volunteers every cuddle.

Being a ‘big dude’ Bear has also attracted the attention of some of the boys in school, he is a ‘cool’ dog to be friends with. So some of the most disadvantaged children academically are getting the greatest benefit.

Bear has been the reason selective mute children have spoken for the first time in school (not a dry eye in the playground!), children with mobility challenges holding onto his harness and taking steps around the school independently and snoot boops with children who are scared of dogs.

Children who struggle to focus in the classroom will happily sit and stroke Bears paw while they tell stories of their day.  He’s a calming influence in class providing endless emotional support for children, parents and teachers.

Jo tells of a celebration day at school where Bear was taking a few minutes break, in the shade with an ice-cream. A child came running over, skidded to his knees in front of Bear and hugged him, “my dog died last night Bear.” Bear rested his head on the boy’s shoulder, hugging him. You can’t train a dog for that kind of response, Saint Bear just knows.

PAT dogs are a very special breed, they should be calm in temperament and well socialised.  Jo puts a lot of Bear’s success in dealing with the practical aspects of his work down to his early socialisation. He was introduced at a young age to all manner of noise, people and places. He learned that almost every situation is safe and so he can relax and enjoy the experience.

Bear really is a great big rockstar, and with his adventures only just beginning you can be sure you’ll hear much more about this boy in the future. 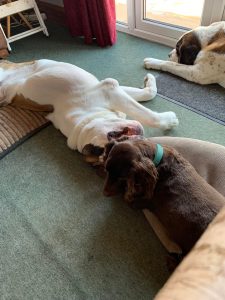 For the new puppy owner who wants a happy, well trained and healthy puppy PLUS lots of fun!
Find Out More
NEW!
PrevPreviousOne Man’s Trash Is Another Man’s Treasure
NextNancy PantsNext 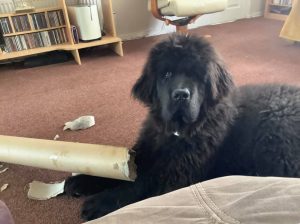 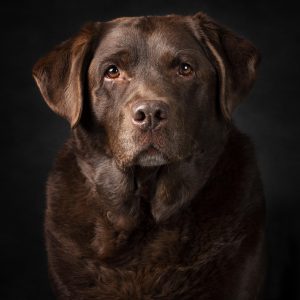 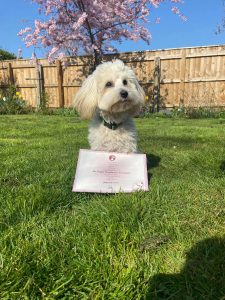