Puppy fear periods are normal milestones in puppy development and all puppies go through them. They will experience two different fear periods before reaching adulthood and each fear period will last roughly 2-3 weeks. During a fear period, puppies become more sensitive and aware of the world around them. They may become concerned or unsure about new objects or experiences that previously they may have enjoyed. If they become too sensitive towards something, it tends to imprint into a young dog’s mind which can affect their behaviour for the rest of their life. However, you can help a puppy work through a fear period and come out the other side more confident. 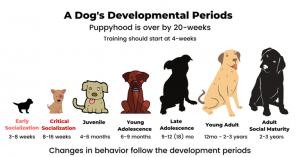 Fear Period 1 – Puppies tend to experience their first fear period around 8-11 weeks old. This coincidentally tends to be around the time when they come home to live with their new family and start exploring the world. You want to be thoughtful about what your puppy experiences during this time and be mindful not to overwhelm a new puppy. Instead, you should have situations where the puppy can explore by meeting new people and having new experiences without it being pressured or forced to interact.

Fear Period 2 – This fear period can be anywhere between 6-14 months and tends to take owners by surprise. Smaller breeds usually experience their second fear period earlier than large breeds as they often physically mature much sooner than larger puppies. It feels as though everything you have taught your puppy has fallen apart as they can go from a confident, engaged, and smart puppy to a worried pup but please don’t panic – this isn’t forever!!!

It is believed that these fear periods in adolescent dogs will provide them with their ‘fight or flight’ instincts meaning they are learning what they are supposed to be afraid of and subsequently what they should avoid for survival purposes.

During these fear periods, they can go through something called a single-event learning which means it only takes one negative incident to create a trigger in their future. From a survival point of view, pups in the wild would need to create that flight or fight response to survive. However, due to our canine companions being very well cared for, sheltered, and protected, these stages are not as necessary as they would be in the wild. However, we can use these stages to our advantage and help a fearful puppy overcome their worries and help build trust in your relationship which can help prevent behavioural issues later in life.

Fear behaviours vary widely between dogs and can range anything from cowering underneath the bed to suddenly snapping at other dogs or humans. It is important to realise that dogs showing aggressive behaviours is very often fear driven. There are many tell-tale signs that a puppy is fearful or stressed which can include but is not limited to excessive panting, whining, barking, freezing in place, refusing to come out of a secure place, trying to run away, etc.

Tips to help get your dog through a fear period:

For the new puppy owner who wants a happy, well trained and healthy puppy PLUS lots of fun!
Find Out More
NEW!
PrevPreviousDog Head Shapes And Why They Matter
NextHow Much Sleep Does A Puppy Need?Next 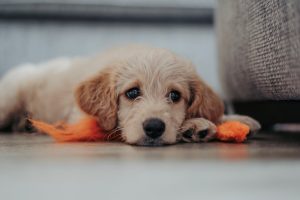 How to prepare your dog before having a baby: 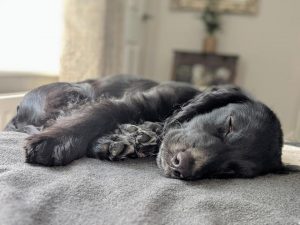 How Much Sleep Does A Puppy Need? 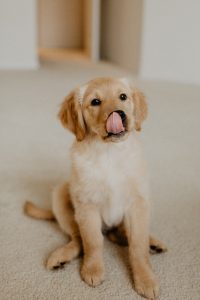